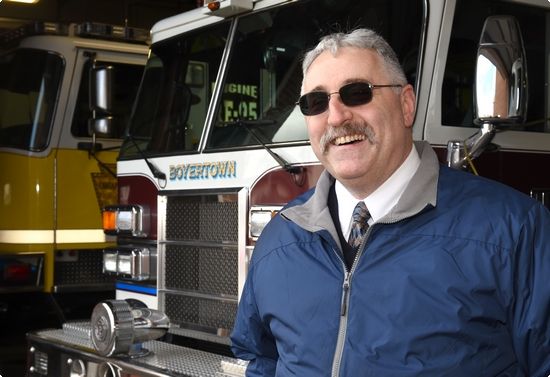 For years, Mark Malizzi has given his time and talents to the Boyertown community, operating in the background, never one to seek recognition for his efforts.

“The driving factor is that for years I’ve heard people have time to complain about how bad things are in the community,” Malizzi said. “If we don’t step up to the needs in the community, it’s never going to change.”
Despite his modesty, Malizzi’s charitable work has not gone unnoticed. He has been selected as the Boyertown Area 2016 Citizen of the Year, and he’ll be the special guest at the 62nd annual awards event on April 9 at the Boyertown Museum of Historic Vehicles.
“Mark tries to do a lot of things behind the scenes and doesn’t ask for recognition,” said Roger Lehmann, chairman of the awards committee. “I think that embodies what the citizen of the year is all about in that it typically is driven by people who try to help the community out behind the scenes.”
Malizzi said he is humbled by the honor.
“There’s so many people through our community that do great work to help people,” he said. “And for me to even be nominated, let alone chosen, it really touches my heart very deeply that apparently the things we’re doing in the community are making that much of a difference.”
Malizzi, 51, of Douglassville, founded Thunder Outreach Ministries with his wife of 31 years, Lisa. The ministry, which has about 20 volunteers, helped to revitalize the exterior of the Boyertown Inn at North Reading and East Philadelphia avenues.
The historic building is a mainstay of Boyertown’s downtown, and Malizzi’s group helped paint the exterior and repair some of the front columns.
“As people come into town, it makes them smile, it brings them back to an 1800s sort of feel,” Malizzi said of the building.
“He (Malizzi) put a lot of personal time and effort into it and coordinated the volunteer efforts of all the people who assisted in it,” Lehmann said.
“It certainly is a focal point of the community right there at the intersection, and it came out awesome. He did an awesome job.”
Malizzi also is known in the community through his job as service director at Fred Beans Ford of Boyertown.
His work with Thunder Outreach includes partnerships with the Boyertown Salvation Army as well as numerous other nonprofit organizations throughout Berks County. And he is chaplain for Boyertown Area Fire & Rescue.
“Interacting and working with them is important to me,” Malizzi said of the emergency crews.
Despite the many hats that Malizzi wears, and the many projects he has participated in, Malizzi has a much simpler outlook on what drives him to keep working in the community.
“If I go down in history as being one thing, I just want to be known as somebody who cared,” he said.

61st Boyertown “Citizen of the Year” Winner is Lori Carnes !

63th Boyertown “Citizen of the Year” Winner is Pastor Paul Will...
Scroll to top